Maruti Suzuki introduced the second-generation Celerio in the country on 10 November 2021. Based on the Heartech platform, the Celerio is available in four variants, namely LXi, VXi, ZXi and ZXi+ and six different colours.

In terms of design, the Celerio gets a completely overhauled exterior. For instance, there are new headlights, circular fog lamps, taillights, bumpers, 15-inch alloy wheels and side-view mirrors with integrated turn signals. Apart from that, the Celerio comes with ABS, EBD, hill start assist and rear parking sensors.

Maruti Suzuki has redesigned the interior and given additional features. The cabin features a new instrument cluster, an infotainment touchscreen, an engine start/stop switch and a steering wheel with audio and phone controls.

Under the bonnet, the Celerio is equipped with a 1.0-litre three-cylinder petrol engine that produces 66bhp and 89Nm of torque. It can be coupled with a five-speed manual or AMT.

Find a list of all 7 petrol and 1 CNG versions of Maruti Suzuki Celerio. This table includes on-road price which covers all costs like RTO and Insurance. Does the new Celerio bring the same charm as its predecessor to the fiercely-fought high-volume budget hatchback segment? In the new, second-generation Celerio, we had expected Maruti to offer the peppy 1.2-litre K12 four-cylinder from the Swift and Wagon R. After all, the new Heartect platform permits it too. Instead, Maruti has decided to introduce a new engine in the K-Series family. This one is called the K10C and is a three-cylinder, dual-jet, dual-VVT motor that has been on sale internationally. But in India, it debuts the segment-first auto start-stop function. Producing 66bhp of power and 89Nm of torque, the new Celerio is down on figures compared to the older one, by 1bhp and 1Nm. But it’s slightly lighter as well, tipping the scale between 820-825kilograms. Crank it up and the motor does feel refined and vibration-free on idling, especially for a three-cylinder. On the move, the power delivery from this new engine is progressive and linear. The clutch is light to operate and the gear lever, in a typical Maruti fashion, has smooth and short throws. At slow city speeds, the engine proves to be very user friendly. Thanks to the strong low- and mid-range, you can either shift close to 1,200rpm or hold it until 3,000 to 4,000rpm and the engine still feels relaxed and unstrained. There are many little improvements gone into this K10C which make it very easy to drive. At highway speeds, the motor relaxingly churned around 2,000rpm. Also, the insulation inside the cabin at highway speed is better than we expected. We also sampled the two-pedal setup and we think the AMT technology has come a long way since its introduction. Now, in the new Celerio, the five-speed AMT shifts are close to 2,000rpm. Surprisingly, when using light throttle inputs under sedate driving, the upshifts are almost free of jerks that are usually associated with an AMT gearbox. It is only when you hurry it that the AMT finds itself undecided on what action needs to be taken. So, you’ll have to plan the overtakes well in advance. Meanwhile, when given some beans, the AMT will hold on to gear up to redline before upshifting. For some enthusiastic driving, there’s also a provision for manual shifting. The AMT version is available across all variants of the Celerio except the base LXi and it surely is worth the extra premium over its manual counterpart. In terms of ride quality, the new Celerio manages to absorb all the bumps, potholes, and irregularities with good composure. Only the sharpest of creases or abrupt road imperfections are felt as well as heard inside the cabin. Moreover, the higher ground clearance also adds to the sense of relief when tackling bad road sections. And when the roads cease to exist, the Celerio soldiers on without any bother. A suitable hatchback for city and rural landscape alike. There’s a fair amount of body roll when pushed hard but this is not a car you go corner carving on. Going almost four turns lock-to-lock, the steering in the new Celerio isn’t the quickest. But it is light to operate and won’t be troublesome for those who spend long hours in traffic. The steering wheel isn’t self-centring or linear either. But how does it fare in day-to-day driving, we’ll have to wait for our full-fledged road test to find an answer to that. Based on the fifth-generation Heartect platform which it shares with the Baleno, Swift, and Wagon R, the new Celerio is 55mm wider than the outgoing model with the wheelbase going up by 10mm. Meanwhile, the overall height is down by 5mm and the overall length remains unchanged. As for the design, the new Celerio is easy on the eyes just like the previous one was. There are some newer elements too, like this grille with a chrome slat joining the bulbous headlamps. There are simple halogen bulbs in here and no LEDs or DRLs of any kind. However, you do get circular fog lamps integrated nicely with the blacked-out lower grille design. If you think the face is inspired by the Alto, move to the side and there’s some resemblance here with the S-Presso. The 15-inch alloy wheels done in black chrome finish are new and we think they blend well with the tall-boyish stance of the new Celerio. At the back, there are high-mounted tail lamps with small design details like this tapering. Again, no LEDs here, just plain halogen bulbs. Overall, the Celerio design is more rounded off and has no edgy elements. The squarish and angular design of the first-gen is replaced by smooth flowing lines, and there’s no sharp crease visible around. It takes elements from various Maruti models and blends them into a well-rounded dough. Maruti has managed to keep the Celerio’s design inoffensive and buyers will like it parked outside their houses. On the inside, the cabin of the new Celerio is an all-black affair. Which is a good departure from the boring black and beige. You do get some silver inserts around the air vents, on the centre console, on the steering wheel, and around the gear lever. For practicality, there’s space for knick-knacks, a couple of cup holders, bottle holders on the door, and a glove box. Now I am 5.5ft and there’s an ample amount of headroom for me and taller drivers won’t find it difficult to find a good driving position either, thanks to height-adjustable seats and tilt steering. We loved these seats offered in the Wagon R, and in the Celerio they still prove to be well designed, offering a good amount of support. There’s a dead pedal provided to rest your left foot and that’s a welcome addition. Most of the cabin is carried over from Wagon R, like the steering wheel, instrument cluster, and seven-inch touchscreen unit. In fact, the placement of the head unit of this multimedia screen is at the same quirky height. The quality of materials used all around isn’t something to complain about either. But if we were to nitpick it would be the placement of window switches and central locking on the centre console below the touchscreen and not on the door. Many buyers won’t mind but it’s the fact that even the Wagon R gets conventional switches gets our goat. As for the back seat, it’s comfortable to get in, thanks to these wide opening doors. So older people or kids can get in without any problems. And the space here isn’t too bad either. The seat does feel upright and they lack the under-thigh support, even the non-adjustable headrest isn’t comfortable. There’s good knee- and head-room with the front row set to my driving position. But there’s no centre armrest or air vents. We think it is best suited for two at the back. Lastly, the boot space of 313-litres is larger than before. There’s also a 60:40 split seat in higher trims which is a nice addition. You can easily haul long weekend luggage of four here. And there will be more room to spare when a CNG tank will take up most of this space. The new Celerio is offered across the familiar LXi, VXi, and ZXi trim with the ZXi Plus joining the line-up. Standard features across the range include dual-front airbags, ABS, rear parking sensor, child lock for rear doors, and manual AC. What we are driving here is the top-spec ZXI Plus and its feature list includes a seven-inch SmartPlay Studio touchscreen with Apple CarPlay and Android Auto with four speakers, steering mounted control, height-adjustable driver seat, engine start-stop button, keyless entry, electric adjustment and foldable for ORVMs, tachometer, and front fog lamps. Of the things it misses out on, we think the rear camera and rear AC vents are the most important ones. Additionally, there are customisable packs that can be opted with additional accessories for some personalisation touches. Pricing for the new-gen Maruti Suzuki Celerio starts at Rs 4.99 lakh and goes all the way up to Rs 6.94 lakh, ex-showroom for the top-spec AMT we have driven here. It might have gotten a lot expensive than the outgoing Celerio, but it still is at par with its direct rivals which include the Hyundai Santro, Tata Tiago, Datsun Go, and its own sibling Maruti Wagon R. So, does the new Celerio brings the same charm as its predecessor to the fiercely-fought high-volume budget hatchback segment? It absolutely does. There’s a CNG version in the pipeline that is expected to gain more popularity than this claimed ‘most fuel-efficient engine' but we’ll have to wait a bit longer for that. And we’ll surely be putting this new engine to test in real-world conditions to see how fuel-efficient it proves to be. Until then, the Celerio makes for a good first car as well as a convenient runabout because it is a genuinely well-rounded compact hatchback that’s easy and convenient to drive, has a practical cabin with space for four and their luggage, a decent list of features, and will easily and comfortably take your family around town without burning a hole in your wallet.

Note: Specifications for Celerio LXi have been mentioned 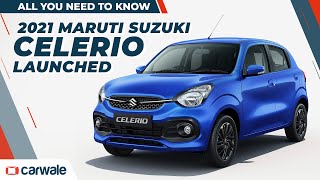 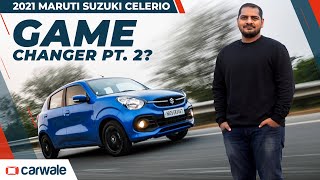 The Celerio CNG is available in only VXi variant. The brand-new Celerio is offered in a choice of four variants, namely LXi, VXi, ZXi and the ZXi+. The quantum of the hike by Maruti Suzuki, which is applicable for its entire range of models, is expected to be announced in the coming weeks.

Maruti Suzuki has already commenced the pre-launch bookings for the all-new Celerio in the country.