Exterior
The updated Kodiaq features a new front end and a mildly redesigned rear end. More precisely, there are new LED headlamps, daytime running lights, radiator grille with a chrome frame, new bumpers and tweaked rear lights. Besides this, Skoda provides chrome or black inserts for the exterior, depending on the variant. In addition, the SUV comes with 18-inch alloy wheels, roof rails, keyless entry with request sensors available on four doors, powered and hands-free boot opening and side-view mirrors with auto-dimming function.

Interior
On the inside, Skoda has given a new steering wheel, upgraded eight-inch infotainment system with wireless connectivity for Apple CarPlay and Android Auto and a 10.25-inch digital instrument cluster. In addition, the seats wear a leather upholstery available in either Stone Beige or Black.

Engine and transmission
The Kodiaq comes powered by a 2.0-litre, four-cylinder, turbocharged petrol engine mated to a seven-speed dual-clutch automatic transmission. This motor makes 187bhp and delivers 320Nm of torque. Besides this, the Kodiaq also comes equipped with a 4x4 system.

Find a list of all 3 petrol versions of Skoda Kodiaq. This table includes on-road price which covers all costs like RTO and Insurance. This is not a generation change, but the first proper update for Skoda’s first SUV - the Kodiaq

-        Comfortable and effortless to drive With the new update, the Skoda Kodiaq will be offered with a new petrol engine, unlike the erstwhile diesel. This new engine is the familiar 2.0-litre TSI making 187bhp and 320Nm paired to a seven-speed DSG automatic transmission. The power is sent to all four wheels through an electronically controlled AWD system. Skoda says this petrol-powered Kodiaq can do 0-100kmph in 7.8 seconds. We have already seen this engine in the Volkswagen Tiguan and Skoda Octavia. It feels refined right from the word go. Power delivery is smooth and linear and it’s quite predictable as well. There’s no lag at slow speeds and you can easily potter around town with the engine idling close to the 1,500rpm mark. Give it some beans and the engine comes alive after 4,000rpm. It’s progressive to the redline and the motor never feels strained, irrespective of the speed you are doing. Even on the highway, there’s always power in reserve when there’s a need for quick overtakes. So, the Kodiaq can manage everyday commutes as comfortably as it can cross continents. The dual-clutch transmission is butter smooth, going up or down the cogs, and compliments Kodiaq’s personality very well. Even in kickdown, there are barely any lurches and the Kodiaq remains effortless through and through. There’s also a provision of manual mode with paddle shifters for one of those days when you’d want to have some fun behind the wheel. There are six driving modes in the new Kodiaq as part of the new Dynamic Chassis Control (DCC) system. Each mode alters the throttle response and gearshifts, with dedicated off-road-focused modes for times when the going gets tough. Similar to the previous Kodiaq, the ride quality continues to be one of the highlights here. It's stiffly sprung like any other European car but never gets uncomfortable. Part of DCC are dual-shell, gas-liquid shock absorbers controlled electronically, providing optimum damping characteristics. As a result, the ride remains consistent and flat over most of the surfaces. Even over broken patches and rutted surfaces, the Kodiaq’s ride remains unfazed and comfortable. Skoda says the update also comes with something called the ‘Progressive Steering’. Depending on the driving conditions and speed, the steering input alters. This helps in reducing the turning circle at slow speeds, making the Kodiaq easy to manoeuvre through narrow streets. At the same time, it doesn’t need constant correction at higher speeds. Going two turns lock-to-lock, it’s fairly quick and progressive as well. On the flip side, the steering could do with slightly more connect and feel. So, when taking corners with some enthusiasm, it’s not very confidence-inspiring.

Hence, the Kodiaq makes for a great companion irrespective of your love for driving or opting to spend most of the time in the back seat. Globally revealed last year, this facelift has some interesting changes on the outside. Here, the grille gets the new Skoda family design. There’s still a chrome surround on this characteristic grille but now those louvres are also garnished in chrome. As for the LED headlamps, they have gone sleeker and look quite like the ones on the third-gen Octavia before the split. Its sleeker design gives the Kodiaq a much more modern appeal. Meanwhile, the second set of lights carries forward the Czech carmaker’s design direction. That said, there are no drastic changes on the lower bumper. Similarly, no changes are seen in the profile. But these newly-designed multi-spoke 18-inch wheels are part of the update. At the back, there are changes to LED tail lamps, but you’d need a keen eye to spot the difference. With the subtle changes, the Kodiaq now looks much more imposing yet recognizable. It’s more modern as well, especially when compared to other butch looking seven-seater SUVs in the segment.

Overall, the design changes on the Kodiaq aren’t drastic but just the right amount to keep it fresh for a few more years. Step inside and everything looks familiar, indicating the minimum quantum of change done here. You do however get this two-spoke steering wheel which is newly designed for modern-day Skodas. It’s quite aesthetic but needs some tactile feel to it. Behind it is a 10.25-inch all-digital display which is a part of VW Group’s Virtual Cockpit. Despite being half a decade old, the cabin layout is clean with uncluttered buttons, easy to reach controls, and good quality of materials all around. Some of the bits are shared with many older models, but they still don’t look out of place here. The centre console has an integrated eight-inch touchscreen which does appear in the need of an update. It’s not exactly 'last-generation', but could do with crisper display, better interface, and more control functions as well. The Kodiaq is a big car. So you get ample space on the inside. There’s a good amount of headroom, large windows with good visibility all around, and the cabin is quite ergonomic as well. Also, this being a Skoda, it’s high on practicality. There’s this large space under the armrest for knick-knacks, a dual glove box, and some clever storage spaces. Also, a boon for our weather, these seats are cooled as well. Unlike other ladder-on-frame SUVs, the Kodiaq is quite easy to get in. Most of the owners of this L&K trim will be spending their time in the second row. So, you get a good amount of head and legroom. Even a passenger can accommodate in the middle seat despite the raised floor and hard seat cushion. The backrest for the middle row is also adjustable for recline. More importantly, the Skoda Simply Clever features include these neck braces that cocoon you when napping after a long day or when journeying through the country. Lastly, the third row isn’t spacious enough for an adult except for very short trips. But kids can do here just fine. As for the boot, with the third row up, the space isn’t something to write home about. At 270mm, it is not more than what you get in something like a Volkswagen Polo. So, not exactly ideal for weekend luggage of seven. Put the seats down and the space is expanded to 630 litres. Again, not large enough to move a house, but more than enough for most of your needs. And if you do want to move a house, fold down the middle row as well and space goes up to 2,005 litres. Now, this L&K trim has quite a lot of kits on offer. It comes with a long feature list that includes a panoramic sunroof, a 10.25-inch fully-digital instrument cluster, an eight-inch touchscreen infotainment system with Apple CarPlay, Android Auto, and SmartLink connectivity with inbuilt navigation and a 360-degree camera. For creature comfort, you get three-zone climate control, a reverse camera, 12-way electrically adjustable front seats with cooling, heating, and memory functions, cruise control, rain-sensing wipers, wireless charger, and electric boot with foot gesture opening and closing. This L&K trim also has a 625-watt Canton 12-speaker music system. Then there’s also park assist for parallel and perpendicular hands-free parking. If we were to nitpick, the new Kodiaq misses out on a few features like conventional USB sockets. And the new-age ADAS features could have made the deal even sweeter. It’s also sad to see the absence of a door protector which was part of Skoda’s Simply Clever features. In terms of safety, the Kodiaq has standard fitments including nine airbags, ISOFIX child anchor points, front and rear sensors, ABS with stability control and brake assist, and hill hold and hill descent control along with tyre pressure monitor. As part of Skoda’s Simply Clever features, you also get some useful equipment like an umbrella in the front door, blanket and headrest in a nap package, coat hook and ticket holder, and thick floor mats. This is not a generation change, but the first proper update for Skoda’s first SUV. With this facelift, the Kodiaq gets a new exterior design, ditching the diesel engine for a new petrol one, adding modern features to the list, with some changes on the inside as well. Although there is a five-seater version available internationally, the Kodiaq will continue to be offered in India in a three-row seven-seater configuration. The pre-facelift one was available in Style, Scout, and L&K trim. This time around, the off-road-ish Scout variant is replaced by a slightly sporty Sportline trim. This updated Kodiaq has been launched in India at a starting price of Rs 34.99 lakh (ex-showroom). At this starting price, we think this Kodiaq offers great value, especially when compared to the recently introduced Volkswagen Tiguan which is a couple of lakh cheaper, but also a five-seater and has fewer features. As for the competition, you have the Toyota Fortuner, MG Gloster, Citroen C5 Aircross, and some premium soft-roaders like BMW X1 and Mercedes-Benz GLA. The Skoda Kodiaq still is a definitive choice for those who don’t want a flashy 4x4 or a premium badge just for a style statement. The new Kodiaq improves on its understated character, is high on practicality, is well built and oozes quality, is decently decked up with features and creature comfort, and even the newer powertrain doesn’t give any reason to complain. At the end of the day, you cannot go wrong buying the new 2022 Skoda Kodiaq.

Note: Specifications for Kodiaq Style have been mentioned 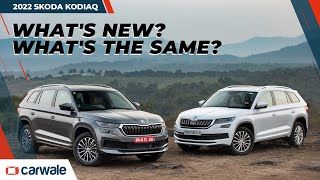 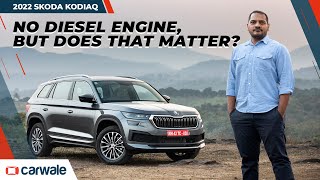 2022 Skoda Kodiaq sold out for the next four months The Kodiaq is being offered in 3 versions, one petrol engine and eight colour options 2022 Skoda Kodiaq to be launched in India on 10 January

The new Kodiaq will get a 2.0-litre, four-cylinder, turbo petrol unit mated to a save-speed DSG automatic.

New Skoda Kodiaq is available in three variants and a single powertrain option.

Skoda Kodiaq facelift to be launched in India tomorrow